13th January 2020. During our assembly this morning, we talked about the bushfire devastation in Australia, in particular how Mogo Zoo on the South coast of New South Wales, managed to keep their animals safe in the middle of the fires, and how we can all help by making ‘bat wraps’ to send to Australia.

The children discussed that over the past months, thousands of Australians have had to leave their homes due to bushfires, with temperatures higher than 40°C in every state in the country. Although bushfires are normal in Australia, this year excessive strong winds, storms and raging temperatures have created dangerous conditions in many places. They learned that, amidst the devastation, a small zoo called Mogo Zoo in New South Wales has managed to save all of its animals through incredible bravery from the staff. Despite being right in the line of the first, the keepers managed to protect all 200 animals (primates, zebras, rhinos and giraffes) from harm. While most were sheltered at the site, monkeys, pandas and even a tiger were kept in temporary lodgings at a keepers’ home.

The children also learned about thousands of flying foxes that are being injured or stressed in the heat, drought and fires, overwhelming wildlife carers. In December, 23,000 spectacled flying foxes (about a third of the species’ population in Australia), died in North Queensland. Orphaned bat pups can be helped to survive using special fabric wraps to mimic the safety of their mothers. These ‘mumma wraps’ are straightforward to make and our children are planning to make and send wraps to Australia to help save orphaned fruit bats.

Evie from Class 2 was the first to make one. Well done Evie! 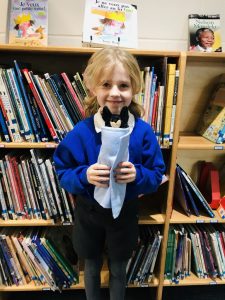