Class 3 & 4 went to the Ramsbury Tennis Club for a tennis tournament, the sun was shining; perfect weather for tennis.

When we got there we were split into groups. I was in the A group with Olivia, Arthur and Andrew. Half an hour later the tournament started.

Olivia and Arthur were the first people to play, romping to victory they won their matches, starting a winning streak for Ramsbury. Andrew and i were next to play. We both won our matches as well! We were into the semi-finals!

We played against another Ramsbury team in the semi-finals, who were great but we beat our class mates again and got a place in the finals.

Ironically, i was paired with a girl called Ellie! She was good although i managed to beat her on my serves. My team did really well. We lost one match but it didn’t matter because we won the whole tournament!

We all sat in the group waiting for other people to get their certificates, we had to wait until last because we were the winning team. But we got our medals eventually, i was so happy!

And luckily we had won a Golden Ticket for Ramsbury!…Again! 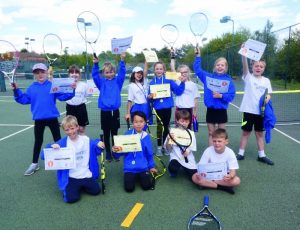